As with almost all dice games, the comments in the ratings very often indicate a successful game, the probability of rolling the dice is doubted or critically questioned by everyone. These kinds of comments are independent of which software you are talking about – the „personal dice pitch“ is often observed and commented on. However, a good application should be able to access a random function generated by the hardware to determine the randomness of the dice, so that the randomness cannot be influenced, regardless of the playing strength.

One often reads about artificial intelligence or AI (Artificial Intelligence) in the context of backgammon games, which the computer is supposed to use to play against humans. However, this is only a fallacy, the probabilities are calculated without a neural network based on the dice probabilities, different combinations are calculated to win. Depending on how strong the computer is set up, more combinations are calculated in advance. Ultimately, however, the game is also based on the luck of the dice, so this is only possible to a limited extent.

If you would like to play a free backgammon game based on a neural network, the open source GnuBG is suitable.

If you want to play backgammon with your friends, family and relatives, the backgammon cases or game boards are the right way to start playing backgammon.

Often people are looking for a backgammon game that is available as a download – that is, one that can be downloaded to the device (smartphone, tablet or PC). Here the wish to play without an internet connection is also present. The disadvantage is that you can only play against the computer. With many backgammon apps this is possible. 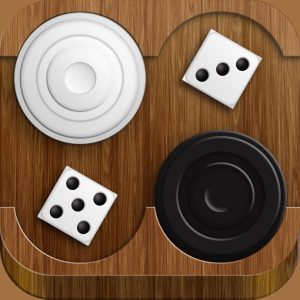 Backgammon+ is a very popular iOS app that you can use on the iPhone to play backgammon. 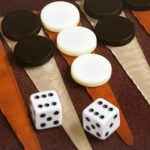 True Backgammon HD is another application that allows you to play backgammon on the iPhone.

Currently there are the following apps for Android, which allow a backgammon game against computer:

There is the possibility to display and train moves and to adjust the playing strength individually. More about Android Backgammon Apps soon.

Play Backgammon App in the browser of your smartphone

You want to play backgammon online? Use the opportunity to play against real friends and opponents on the Internet.