Backgammon is not a classic game of chance like roulette, slot machine games with jackpot or card games like Skat and Book of Ra which are played in the casino.

Luck on the dice is only relevant to the extent that the dice rolls cannot be assessed beforehand – but how backgammon is played and the dice theory is considered in the form of a potential opponent analysis is not so much a matter of luck, but rather of reason and logic associated with the game.

Another aspect that is relevant in a game for money is the time factor. Many games which are played for real money (real money) are of relatively short duration – in contrast to backgammon, which is relatively slow in individual games. Backgammon is therefore not a fast game of chance to make big money – if you play backgammon at a high level, there is the possibility to play for prize money at tournaments – but otherwise there is also the possibility to play backgammon online for money. At the latest when playing in tournaments, it is no longer about play money, i.e. money that can potentially be lost, but the deposit for a tournament is usually significant.

In backgammon there are different types of games – when you play for money, this type is called a money game. Here, no match is played, but a stake is placed which can be multiplied by using the doubling cube. Other rules can also be used in money games, for example the Jacoby rule, named after Oswald Jacoby. In online backgammon, there are variations of this rule and it is possible to play over several rounds, or to set a maximum stake and thus a profit.

How does the stake and the game for money work in Backgammon?

Backgammon can also be played for money with a backgammon case together with friends, acquaintances and relatives. Here it is just like in an online backgammon game, the first thing to do is to determine the stake.

If you start a new backgammon game online, e.g. providers like Gameduell, you can start this game for several rounds and set an entry fee. In the actual game, however, there is the possibility to use the doubling cube to increase the potential win in a game. 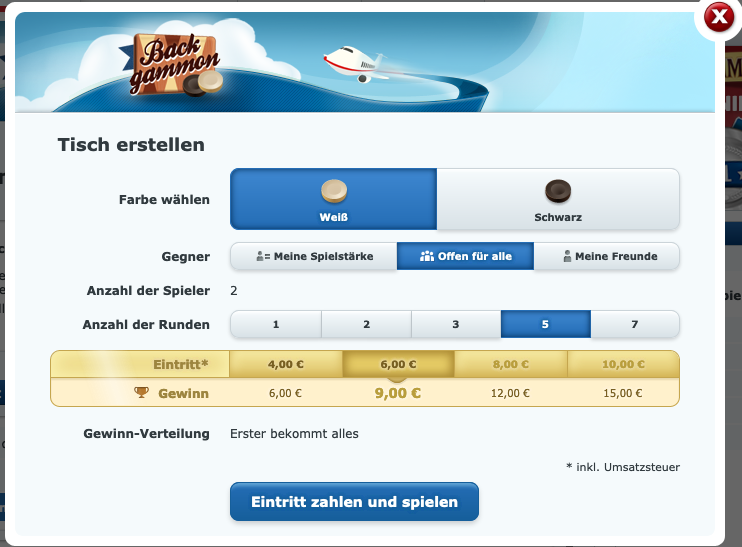 The doubling cube can be used initially by any player who has rolled the dice and sees a chance to win the game. If the opposing player accepts the double, the game continues. If the cube is rejected, the player who initially doubled the cube wins the game.

If the cube is accepted, only the player who last accepted the cube can double. This can be an interesting and dangerous situation for the opponent, which should not be underestimated. In principle it is possible to double up to infinity, but good games are not limited to doubling 4 or 8 times.

What are the chances of winning?

The odds of winning a backgammon game are always based on the line-up and the number of blots that have already been played or are still on the board. So there are different backgammon strategies to block out the opponent, for example, not to let him come out or to prevent a regular game by offensive frequent hitting.

Every player should be able to calculate or estimate the chances of winning or losing based on the blot positions and a possible roll of the dice. When doubling down with the doubling cube, this question becomes acute before the next move – it must be answered by the player to either accept or reject the cube. If you can answer this question well and conscientiously, for example by following certain rules, you can play online backgammon with a doubling cube.

What should one pay attention to when playing for money?

It is not for nothing that there are regulations when it comes to playing for money. Gambling is a way to lose money and highly speculative. If you play for money, you should be aware of this fact and decide for yourself if you can handle it. This is about personal strength and an awareness of one’s own money as well as one’s own abilities within a game for money. Even though you can set up a free backgammon account at the beginning and possibly receive a bonus, a money bet is necessary when playing for money.

A big difference between backgammon and many other games of chance is the time factor. A backgammon game takes a very long time and is not suitable for winning or losing real money quickly. Another point in evaluating backgammon is the intelligence and strategy factor of the game – so it is not based to a large extent on the luck of the dice and chance.

How do you win at backgammon?

The principle of backgammon is relatively simple, many people play backgammon for money. It is about being the first to move your checkers into the home board and then to bear them off the board. Whoever manages to do this first wins points, which can then be converted into real money. With the doubling cube you can multiply these points and thus maximize your profit.

How does the deposit work?

Depositing real money into a user account is very easy. Various payment options are supported, e.g. credit card payments, direct debits from current accounts or Paypal. Depending on the payment method, you can deposit money into your account relatively quickly to play with.

For the deposit there are different predefined deposit options, e.g. 10 Euro via an instant bank transfer, a regular bank transfer or the Paysafe.Card.

How does the payout work?

If you have successfully played backgammon against other players, the points you have earned also become the currency that you can pay out. Usually the points are divided in different ways: Points that you earned yourself or received through a deposit and also Comp Points that you received for a newsletter subscription or bonus payments. There are several ways to do this. You can have the money transferred back to your account via online bank transfer, or you can use Paypal to have the money credited back to a PayPal account.

Within the user account you can link different payment options, SEPA direct debit, credit cards via Mastercard or Visa and Paypal.

Backgammon players as a profession

Many games for money have a certain appeal when it comes to playing in tournaments for prize money. Especially since backgammon as a game among professionals has less to do with luck than with strategy and reason, relatively high prize money is often awarded. These are usually financed by the entry fees – as in other games such as poker, for example, relatively high entry fees of €1,000 are taken to play in a world-class tournament such as Monte Carlo. At the same time, however, prize money of €100,000 is paid out to the winner.

In the USA in the past years, there have been prize money which exceeded this by far, e.g. 500.000 US$ for the winner of a backgammon tournament. Such enormous sums of money are an incentive and reason for many players to learn the game of backgammon and try to master it.

What does a backgammon player earn?

The salary of a backgammon player depends largely on the number of tournaments he plays in each year, how much money he spends on the tournaments and of course how hard he plays and therefore how often he ends up in the front ranks to win money. The winnings from games of chance or tournaments have to be taxed depending on the venue, so this is also a factor in the calculation of the annual salary. As a rule, a backgammon professional can expect a salary of between €30,000 and €60,000 if he wins 2-3 tournaments.

Where can you learn backgammon?

In order to earn your money as a professional tournament player with backgammon, you first need practice and stamina. The game should be learned from the bottom up and all the possibilities of the game should be inside and out. This can be done with a backgammon book, a backgammon course or by learning while playing, for example in online backgammon rooms.